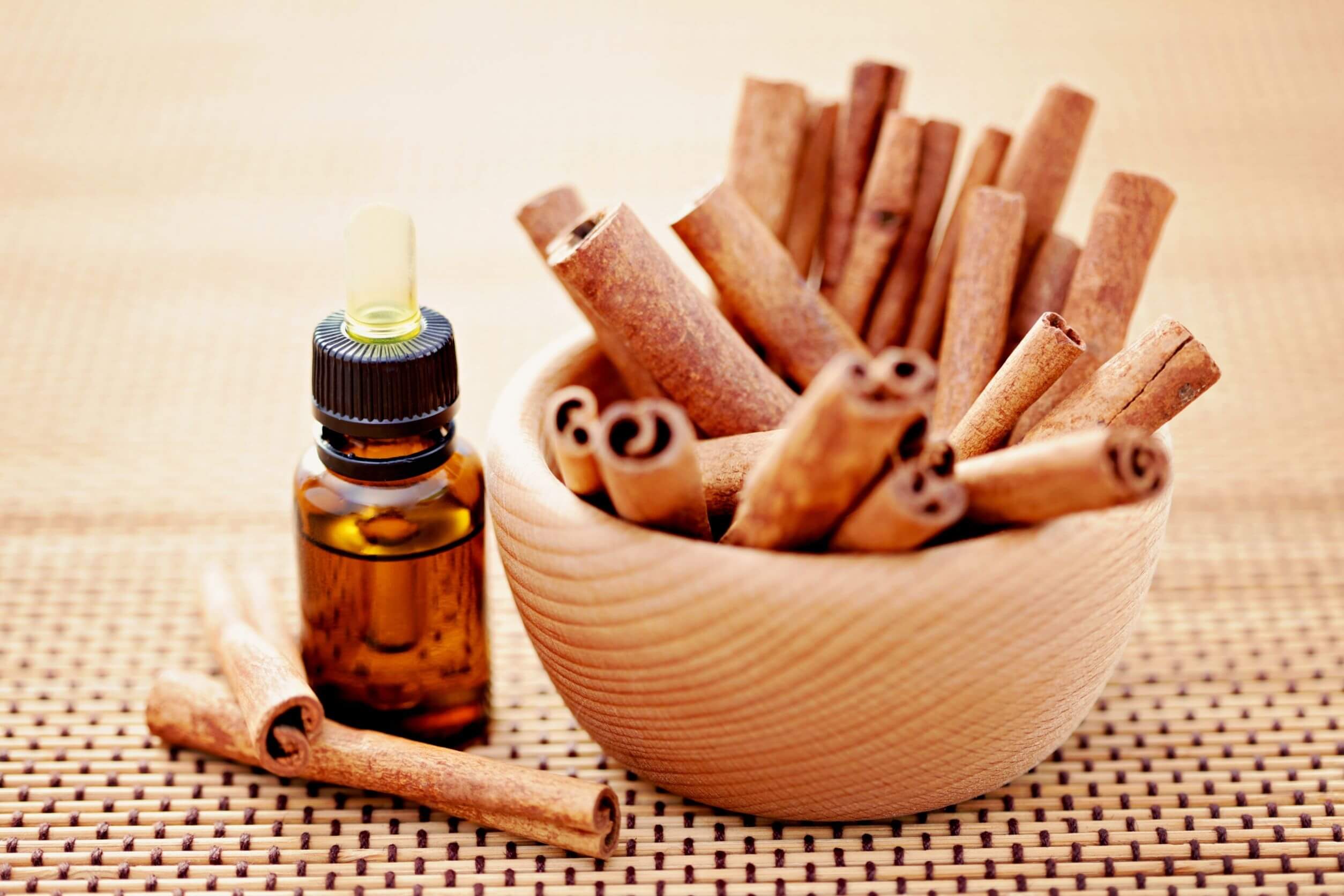 Cinnamon essential oil has been a new favourite since discovering some of it’s really amazing uses. From an all-natural hand sanitiser to a DIY mouthwash, this versatile oil can do it all. Albeit, admittedly, the really good stuff can be a bit on the pricey side. My folks local herbalist in Spain for example sells a 10ml 100% Cinnamon Bark essential oil for 18€ (about £15.40). If you wanted to opt for a Cinnamon Leaf essential oil instead, it will likely be cheaper. Like this 10ml bottle sold at Holland & Barrett for £6.25.

The noticeable difference however, is simply that the bark oil has a slightly spicier, sweeter and overall stronger scent and taste than the leaf oil. The leaf oil is also lighter in colour. If you’re not sure which one is best for you, we recommend trying recipes with both oils and seeing which you prefer. So far, we’ve become obsessed with the bark oil, as we love the strong perfumed scent, antimicrobial effects and powerful kick it gives to our homemade mouthwash.

As well as the fantastic topical uses and functions, it’s also proven to support a healthy immune system, decreasing inflammation, increasing circulation, relieving depression, stimulating libido, and has even been used for it’s ability to fight off parasites and repel insects. Cinnamon, and it’s oil is also packed full of antioxidants, making it a powerful protectant against free radicals.

Cinnamon oil comes from the Cinnamomum tree, which is a genus of evergreen aromatic trees and shrubs containing over 300 species and belonging to the laurel family. They can be found in tropical and subtropical regions of North America, Central America, South America, Asia, Oceania, and Australasia. The most common tree used by herbalists to make essential oils is the Cinnamomum verum, also known as “true cinnamon” (once called Cinnamomum zeylanicum).

When buying any essential oil, pay close attention to the labelling and instructions. The price will also indicate the purity of the product, so if it’s too cheap, be very skeptical. If you’re buying online, be sure to check more than one seller to compare pricing and see more customer reviews. We recommend visiting a distinguished herbalist for your first ever purchase. This way you can talk about all the benefits, effects and uses with the store assistant/shop owner and they can get to know your personal needs a little better. It will also ensure you are getting a proper essential oil which you can hold as a comparison for any future purchases elsewhere.

Become qualified as an Aromatherapist

Reach for nature’s greatest gift with our Aromatherapy Course spanning 12 lessons. Discover the properties of essential oils and their contra-indications, learn how to use them in a treatment session with massage techniques and benefit from therapeutic oil recipes.

Our courses carry internationally-recognised diplomas that entitle you to practice as a therapist anywhere in the world. Our school has a no stress, no commute, no deadlines, and no fuss policy! Just affordable, holistic education right at your fingertips. Enrol with us today to take advantage of our April offers and take a step towards a brighter future.

I am extremely pleased I chose to study with The School of Natural Health Sciences. I will have no hesitation in recommending you. I look forward to receiving my diplomas and embarking on my next courses with you.

I encourage anyone who doesn’t think that they have the time or money to continue learning. The School of Natural Health Sciences provides both – cost effective and flexibility with completing work.

I have been recommending the School of Natural Health Sciences to everybody I know, as a genuine higher learning body that really helps the students and encourages them to excel. Thank you again!

Can’t quite believe I passed my final exam in Iridology with Distinction. Thoroughly enjoyed this course! If I’ve ever had a query your staff have been prompt in response and always so helpful, a credit to you for sure.

I am completely over the moon. I have enjoyed my studies so much and beginning my journey to practice, as an aromatherapist, which I can now officially begin. Your course was so informative and detailed.

Studying this Nutrition course in your school was very enjoyable and flexible. That’s why your school is different from other institutions. The notes provided were very comprehensive and easy to understand. Special thanks to Mr. Tony Edwards my Tutor, for guiding me to complete the course.

I have thoroughly enjoyed this Life Coaching course and I’m really looking forward to starting the advanced one as soon as I can. Please send my thanks to my Tutor Richard who was great throughout and was always there to help with any questions I had.

Learning so much more about what I already love has only evoked deeper love and appreciation for my body and taking care of it. I hope to grow further and develop my business well so as to help as many people as I can!!