Professor Edzard Ernst, the U.K.’s first professor of complementary medicine, gets lots of exposure for his often overtly negative views on the subject. He has become the media’s favourite resource for a view on this controversial subject. The recent report by Barbara Rowlands in the Daily Mail (Complementary Medicines Are Useless and Dangerous, Says Britain’s Foremost Expert, 12 December 2006) is par for the course. 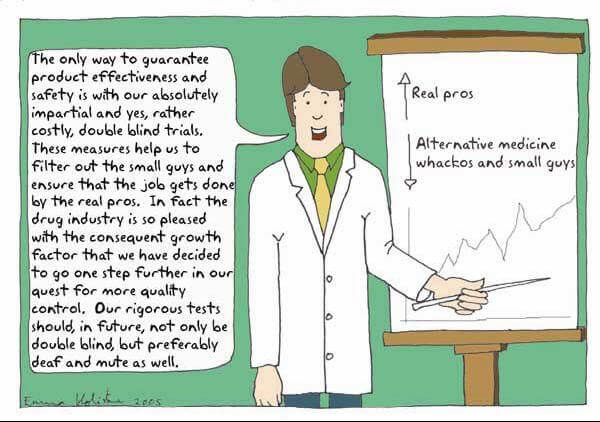 The interesting thing about Prof Ernst is that he seems to have come a long way from his humble beginnings as a recipient of the therapies that he now seems so critical of. Profiled by Geoff Watts in the British Medical Journal, the Professor tells us: “Our family doctor in the little village outside Munich where I grew up was a homoeopath. My mother swore by it. As a kid I was treated homoeopathically. So this kind of medicine just came naturally. Even during my studies I pursued other things like massage therapy and acupuncture….As a young doctor I had an appointment in a homoeopathic hospital, and I was very impressed with its success rate. My boss told me that much of this success came from discontinuing mainstream medication. This made a big impression on me.’
(BMJ Career Focus 2003; 327:166; doi:10.1136/bmj.327.7425.s166).

Here we see Ernst responding as a clinician working in the field of alternative medicine – and also as a consumer, like the millions of Daily Mail readers who have remained passionate about this form of healthcare. The question is: why is there so much controversy over these non-pharmaceutical therapies? Why is it that users keep coming back to food supplements, herbal remedies, homoeopathy and all the therapies medics refer to as “complementary”, while a relatively small group of doctors attack such therapies as if they were in some way illicit.

The answer may lie in the cloudy world of the scientific method, which is perhaps not as objective as many of the alternative medicine sceptics might claim. Being a sceptic (let us not forget that Ernst gave the keynote address to the 11th European Sceptics Congress in September 2003) might suggest less than an open mind. The divergence in views might also have something to do with the variable and often positive experiences of users of these therapies.

After his early support for homoeopathy, Professor Ernst has now become, de facto, one of its main opponents. Robin McKie, science editor for The Observer (December 18, 2005) reported Ernst as saying, “Homeopathic remedies don’t work. Study after study has shown it is simply the purest form of placebo. You may as well take a glass of water than a homeopathic medicine.”
Ernst, having done the proverbial 180 degree turn, has decided to stand firmly shoulder to shoulder with a number of other leading assailants of non-pharmaceutical therapies, such as Professors Michael Baum and Jonathan Waxman. On 22nd May 2006, Baum and twelve other mainly retired surgeons, including Ernst himself, bandied together and co-signed an open letter, published in The Times, which condemned the National Health Service (NHS) decision to include increasing numbers of complementary therapies.

Six months later, Professor Waxman, in an article in the British Medical Journal (BMJ), said on 24th November 2006 that he wanted peddlers of food supplements consigned to “the cobra filled dustbin of oblivion”. I have to say, I’m not sure that such an attitude towards human life is particularly compliant with the Hippocratic Oath, but Professor Waxman has made it clear he feels very strongly about this issue. In the BMJ’s Rapid Responses to the same article, my colleague Dr. Damien Downing and my responses reminded Waxman that orthodox medicine was not well known for its spectacular curative properties. We cited, by example, a recent study of the effectiveness of chemotherapy in Australia and the USA which showed it contributed less than 5% to the 5-year survival rate (Clin Oncol (R Coll Radiol) 2004; 16(8): 549-60).

As high profile as the Ernsts, Baums and Waxmans of this world might be, their views are not unanimous across the orthodox medical profession. Some of these contrary views were expressed just last Sunday in The Sunday Times (Lost in the Cancer Maze, 10th December 2006). The author of the article, Robert Randall, is a cancer sufferer himself. He claims to be a consumer of services offered by both sides of the divide and it is interesting that from this consumer’s perspective, we receive a much more balanced debate. The concept of orthodox medicine relying on the evidence-based gold standard of the randomised controlled trial (RCT) is now wearing thin when it comes to understanding the relevance of this methodology to many forms of alternative medicine. Let’s take nutrition, for example. Is it really scientifically valid to condemn the potential role of supplementary nutrients like vitamin E and carotenoids (from carrots, peppers and other brightly coloured fruits and vegetables) because, when delivered in their synthetic, pharmaceutical forms, they have failed to generate strong beneficial effects in RCTs aiming to investigate their role in reducing chronic diseases like cancer and heart disease? Is it fair to do this when copious evidence from epidemiological and observational studies, which are often less prejudiced by bias and confounding factors, have consistently demonstrated strong associations for the natural, dietary forms of these nutrients? I think not and, as a scientist, I am far from alone.

Natural products work within the human body in a different manner to pharmacologically-active drugs. They often work as complex mixtures in which the components interact with each other synergistically, or they interact with factors in the diet or the body. These sorts of variables are omitted from the pharma-friendly gold standard that Ernst and his colleagues seem to worship. I have no issue with using the evidence base, but I have a big problem with how selective you are being when you view the available evidence.

The real loser in open battles between warring factions in healthcare could be the consumer. Imagine how schizophrenic you could become after reading any one of the many newspapers that contains both pro-natural therapy articles and stinging attacks like that found in the Daily Mail.

But then again, we may misjudge the consumers who are well known for their ability to vote with the feet – regardless. The consumer, just like Robert Sandall, and the millions around the world who continue to indulge in complementary therapies, will ultimately make choices that work for them. ‘Survival of the fittest’ could provide an explanation for why hostile attacks from the orthodox medical community, the media and over-zealous regulators have not dented the steady increase in the popularity of alternative medicine.

Although we live in a technocratic age where we’ve handed so much decision making to the specialists, perhaps this is one area where the might of the individual will reign. Maybe the disillusionment many feel for pharmaceutically-biased healthcare is beginning to kick in…. Perhaps the dictates from the white coats will be overruled by the ever-powerful survival instinct and our need to stay in touch with nature, from which we have evolved.

About the Alliance for Natural Health

The Alliance for Natural Health (ANH) is a UK-based, EU-focused, international, legal-scientific, non-governmental organisation that is working on behalf of consumers, medical doctors, complementary health practitioners and food manufacturers and distributors, to protect and promote natural healthcare, using the principles of good science and good law.

The ANH’s principal objective is to help develop an appropriate legal and scientific framework and environment for the development of sustainable approaches to healthcare. Within this setting, consumers and health professionals should be able to make informed choices about a wide range of health options, and in particular those that relate to diet, lifestyle and non-drug-based or natural therapies, so that they may experience their benefits to the full while not exposing themselves to unnecessary risks.

Students Tell Us Why They Chose Our School
March 1, 2021

Obesity: A briefing for Complementary Therapists
May 1, 2019

The courses have been ‘amazing value for money’, completely enjoyable to do, and fitted around my life with ease. I thoroughly recommend your school to anyone looking to ‘change their career and life’.

I highly recommend The School of Natural Health Sciences (SNHS Ltd) for everyone seeking to learn real healing because this I consider is the first step to help ourselves to get rid of any unwanted obstacles in our bodies and minds.

The flexibility of learning new holistic skills in my own time suits me well. The School has an extensive program for anyone wishing to learn holistic healing craft. Your feedback on my papers was always prompt and brief and I also appreciate your availability on the phone.

I’ve been very busy talking to many people about your school, to many women who need a boost! So I hope this will generate further happy people around:-):-):-) getting to know the exceptional professional SNHS.

I enjoyed the Psychotherapy & Counselling course very much and many thanks to you and your team. I would highly recommend your company and team for their assistance along the way. I look forward to my next courses which should complete my skills set for my future business.

I am honoured to have studied with the School of Natural Health Sciences as it enriches lives with what it stands for. I am looking forward to enrolling on a few more courses and can’t wait to start them!